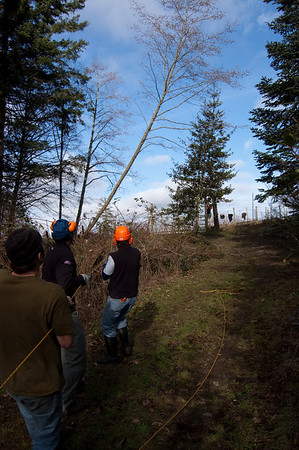 The latest edition in the TWL work party series removed a number of alders growing on the Crawford property which, in full leaf, significantly shade the grapes on Day Road Farm -- on the last farm walk I noticed while elsewhere on the farm the full sun had melted the morning frost this section of the farm still remained white late in the day.

I had never participated in the felling of trees so tall so I watched and learned, fortunately most of the volunteers have years of experience. I think the combination of tree-felling and bring-your-own-chainsaw greatly increased the usual attendance -- we had enough volunteers for two separate teams of ropers, pullers and fellers.

First, the ladders go up and the ropes go on. The ropes will be used to position the tree as it's falling. Prior to the felling, Bart checks the positioning of the tree and the ropes.
The tree is then notched to guide the fall. With this particular tree we needed to avoid bringing down the holly or hitting the deer fence along the property line thus requiring it to be pulled a sizable distance opposite its natural fall line.
Then the back cut is made and the pulling begins. Tug-a-war with a tree -- altogether now!
THUD! Well, we hit the holly (truth be told, I was shooting and not pulling so "we" is really "they") but 'twas just a brushing, no damage done. Nice work guys!
Later in the afternoon I got to operate the next yard toy I want to buy: the BearCat chipper/shredder. I've been eyeing this machine for quite some time but had never operated one before, only the much larger commercial chippers -- I'm in love!
comments powered by Disqus
Dragons, parade, no. Pioneer Square, red, apple pear.